M.A.O
Frau (Furau, フラウ) is a main character in the Peach Boy Riverside series. She is a demi-human capable of immense strength and speed with a constant hunger for carrots. She is despised by those of the Western Continent on account of her appearance.

Frau is a demi-human in appearance, wearing a schoolgirl outfit with a yellow scarf. She has the appearance of a harefolk (a rabbit-looking demi-human) with white fur and long ears. When powered up by Atra, she grows black wings and black hands with incredibly destructive powers.

Frau is an individual of few words, she is friendly with a mysterious background. She is eternally grateful to Sally on behalf of her helping her and is loyal to all of her companions.

Frau lies on the road and is found by Sally, who initially refuses to engage, but she gives her a carrot after hearing her stomach growl. Frau is the first demi-human she has ever met, and bids her farewell. Frau insists she stick around for repayment of feeding, to which Sally expresses some hesitation. Sally tells Frau she can stick around as they venture to and through the village.

Upon entering the village, the two encounter a farmer. The farmer extends greetings but shrieks when he sees Frau up close. Sally is taken aback at the farmer's rudeness and tells Frau they should leave the area. Sally then disguises Frau and both enter the village again. Frau and Sally meet the village chief, who sees them being hungry, welcomes them home and gives her carrots.

In the morning, the village is attacked by an Oni and as its about to attack Sally, Frau comes in and kicks it, knocking it out. The villagers tremble as they haven't seen such strong demi-human. Sally pointed out that Frau protected the village. Frau then goes to the village chief and thanks him for the food. Sally and Frau then leave, but gets arrested by Hawthorn Grattor.

Orginal Power: Currently sealed but once in the past life when Frau still had its original body, Frau was strong enough to single handedly kill the Demon King.

Frau saves Sally and the village

Sally and Frau meet for the first time 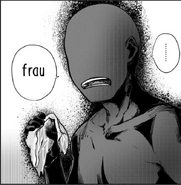 Frau before reincarnation into bunny Frau
Community content is available under CC-BY-SA unless otherwise noted.
Advertisement